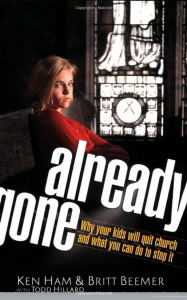 Ken Ham has become one of the best defenders of a literal and recent creation as described in Genesis.  His Answers in Genesis organization and his Creation Museum are doing the church a great service in our day of atheism and evolution.  In this volume, Britt Beemer provides the survey material.  I have a mixed review of this book but the positive value is to understand (via the title) that a weak view of Genesis and/or a lapse in teaching creation literally, contributes to young people losing confidence in the Bible and the church.  It is Ham’s contention that young people are far more influenced by public school science classes than by church Sunday School classes.  He would like to see churches teach more science.

But along with the obvious value of Ken Ham’s good instruction on creation, I would take issue with some of his conclusions regarding the church.  He sees the Sunday School as being out of date and probably unnecessary for today’s families; he (and especially Beemer) thinks the young people have been consistent but the church has been hypocritical in their faith; he thinks churches have been giving too much “spiritual stuff” (p. 124) and not enough science and apologetics; he thinks the church services are not as relevant to people as small groups; he believes the style of worship is not a biblical issue.  Overshadowing all of these is the view that those who have walked away from the church, and even those who never go to church, know more about their faith than those who haven’t; and those who have left are far less hypocritical than those who have remained in the church.  His view is that (especially) young people know what they need from God’s Word but know that the church isn’t giving it to them, so they leave.  I think this is all slanted by the new high priest of the church—the pollster.  We rely more on them than we do on Scripture.  This book should be used with caution in the church.  Though Ken Ham has provided so much good scientific material, this attempt at church polity falls somewhat short.