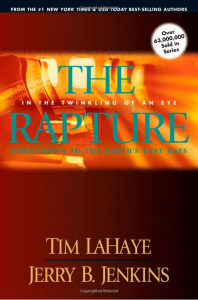 I have always enjoyed Tim LaHaye’s writings when he writes alone and not fiction.  LaHaye has always been a dispensationalist and a pretrib rapturist.  I suppose the Left Behind series served a purpose but they were too much fiction and not enough doctrine.  In this book, LaHaye returns to his roots and defends the pretrib rapture as well as dispensationalism’s tenets of literal interpretation and separation of Israel and the Church.  The few things I disagree with (7 churches being 7 ages of church history; marriage supper being in heaven) are insignificant compared to the benefit this book gives.  Primarily I appreciated his defense of J.N. Darby (along with many other good writers who have done the same) against unfounded attacks about where he got his pre-trib views. LaHaye also defends men such as C.I. Scofield, A.C. Gaebelein, and H.A. Ironside from attacks by those who say they retracted their pretribulation rapture position late in life.  There is also a very good chapter on Marvin Rosenthal’s Pre-Wrath Rapture position and Robert VanKampen’s book The Sign, which is also a pre-wrath position.