On our second day in London we attend morning services at Metropolitan Tabernacle, the church of Charles Spurgeon. Originally formed by a group called the Tabernacle, its roots go back to 1650 when the Baptist congregations were banned from meeting and secretly gathered in homes. Great Pastors such as Benjamin Keach, John Gill, and John Rippon led the group through transitions into a local meeting place, New Park Street Chapel. It was here that Charles and Susannah Spurgeon were married. On our last visit to this historic place, Rick and I stood looking at the front of the current building site as the back was literally being torn down by bulldozers. In the 1850’s, crowds became so large that the congregation moved to the Surrey Gardens which also no longer exists. The current site of the Metropolitan Church was chosen because of its close proximity to the execution place of the Southwark Martyrs and a fitting foundation corner stone at the current building reads, “The blood of the martyrs is the seed of the church.”

Spurgeon was Pastor of Metropolitan for 38 years until his death in 1892. The current pastor, Peter Masters, has held this position since 1970. Sunday services at the church are reverent and solemn in the tradition of the reformed Baptists. Singing is done with just an organ and Dr. Masters leading the congregation. Wednesday night prayer services begin with quiet introspection and proceed with prayerful singing and devotion messages.

Getting to the Church is easy from our hotel: the Northern line goes south to the stop called Elephant & Castle. It was originally the site of a 16th century Shakespeare theater but was later converted to an inn. The façade of the inn bore a gilt likeness of a castle with elephants holding up the main columns. This section of the inn was preserved and is displayed over the nearby shopping center of the Underground stop which bears its name. 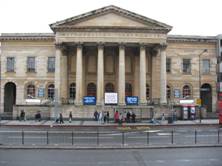