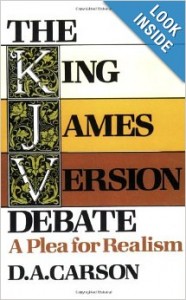 I read this book for the first time (and a few times since, including now) the year it was published (1979) because, as a young Greek teacher, I was embroiled in this controversy. The KJV Only position escalated in the 70s but was never the fundamentalist position, especially of the movement in which I grew up (BBFI). I found myself defending the Bible amidst constant accusations of not being a Bible believer. Carson’s book came along at the right time with sane historical, biblical, and textual facts that I knew but hadn’t put in such a logical way. I could say dozens of good things about the book, but my favorite quote was regarding David Otis Fuller’s book Which Bible? Fuller often used caustic language toward those with whom he disagreed (I have a personal letter myself from him done in such a fashion). In dealing with this sort of ad hominem argument, Carson writes, “It troubles me when this sort of argument appears scores of times in Which Bible? I am forced to conclude that some of its writers are either extraordinarily imprecise thinkers or simply dishonest; and of course I prefer the former alternative.”