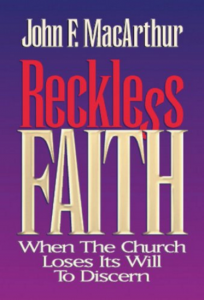 This is another timely book by MacArthur. As usual, it is well written and documented. He is critical of the consumer mentality within Christianity and of the lack of discernment among its leadership. He even uses the term ‘‘fundamentalist’’ in a positive light and compliments its founders as men of discernment.

This volume is timely  also because it deals extensively with the ‘‘Evangelicals and Catholics Together’’ accord headed by evangelical Chuck Colson. While rebuking fellow Reformed writers like J.I. Packer for their participation, MacArthur details the Catholic position on faith from the council of Trent and proposes that Catholics are giving up nothing while Evangelicals are selling their birthright.   Also in this volume is a critique of ‘‘holy laughter,’’ the latest rage among Charismatics. MacArthur defends writers of the Great Awakening (esp Jonathan Edwards) who are being used by Charismatics to defend overt emotionalism historically.

This is valuable information regardless of your views about John MacArthur.  The Master’s Seminary Journal also prints the section on Evangelicals and Catholics Together in the latest issue.