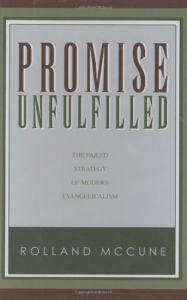 Dr. McCune, former President of Detroit Baptist Theological Seminary, is a former professor of mine from Central Baptist Seminary in Minneapolis.  Dr. McCune’s study of the evangelical movement over the last thirty to forty years is well known through classrooms, lectures and writings.  It is a great help and blessing to fundamentalism to have this material in one volume.  Tracing the evangelical-fundamental break from the early 1940s and following it through to 2004, McCune proposes that evangelicalism has failed to do what it set out to do.  Breaking with fundamentalism over separation, the social gospel, intellectual respectability and cooperative evangelism, evangelicalism has ended up far closer to neo-orthodoxy than to its historic biblical roots.  Current issues such as inerrancy, biblical revelation, social activism, charismatic theology, openness theology, various views on hell and the status of the unevangelized, as well as broadened ecumenicalism,  have left evangelicalism in a weakened and worldly state.

McCune’s contribution lies in the fact that this book presents fundamentalism from a dispensational, pretribulational and premillennial point of view.  It includes the doctrine of separation with biblical and historical support, showing how evangelicalism broke initially over this issue and yet, in the end, the lack of a biblically-based separation became its very downfall.  McCune also believes that a departure from presuppositional apologetics led to an ambivalence on the depravity of man and opened the flood-gates to today’s pragmatic methodologies.  Though it would be nice if all former students got a free (even autographed!) copy, the price for 350 pages of well-documented material on this subject is well worth it.