Plenty of day trips from London will take you to Stratford-Upon-Avon, the home of the world’s most famous playwright, William Shakespeare. It’s an easy walk from the train station to the center of Stratford where the history is contained in a few blocks. Preserved as if one were living in the 16th Century, the buildings and cobbled streets set the stage. The small town sits beside the picturesque Avon River where swans, lush gardens, and small canal boats add to the ambiance. A short cruise on one of the canal boats is well worth the relaxing hour.

Shakespeare’s birthplace is right in the center of town and is open for tours every day. Although not teeming with artifacts from his famous writings, there is an etched signature of Sir Walter Scott on one window. Shakespeare is buried in the Holy Trinity Church, a 10 minute walk along the river. His wife Anne Hathaway’s house, his mother Mary Arden’s house, and one house each of a daughter and granddaughter are public museums. But honestly, how many wooden plates and tin cups can one enjoy in a day?

The Royal Shakespeare Company performs regularly in the Theater built to Elizabethan design. It is beside the Avon and seeing a play in the Bard’s hometown seems most fitting. Their performances are renowned and are repeated at the Royal National Theater in London.

Given too little attention in Stratford by tour books is the museum (located in his mother’s home) to John Harvard, namesake of the famous University. Clergyman Harvard moved to the Colonies where he was instrumental in the success of the new College at Cambridge, MA.  After his death, half of his estate was given to the school and the name was changed to reflect the benefactor’s gift. John Harvard was a Puritan elder and teacher who left London during the years when the plague had claimed most members of his family. Quickly earning a reputation as a scholar in the colonies, he was a leader in making this school a training ground for divinity students. The 2009 Encyclopedia Britannica dismisses this important beginning by saying that, “the college was gradually liberated from clerical control.” His library was said to be one of the largest in the colonies and went to the College as part of his estate donation. Ironically, Harvard died (1638) of tuberculosis, little more than a year after arriving in the New World. 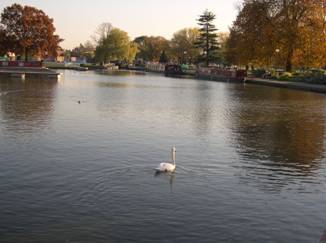