One of our favorite train stations in London is the Paddington Station, home to the famous fictional story character, Paddington Bear. It was here that the lost bear from Peru was found sitting on his suitcase by the Brown family. There was a note attached to the stuffed animal which read, “Please look after this bear.” So the Browns adopted him, named him after the train station where they had found him, and his adventures in London fill the books. Of course, tourists can purchase all manner of Paddington Bear souvenirs at this station.

A three hour train journey from Paddington takes us to Plymouth on the far west coast of England where one of its most beautiful natural harbors still captures much history. From the Hoe (a Saxon word meaning “high above the sea”) and the lighthouse on its crest, the harbor view of Plymouth Sound is spectacular. Chronologically, the history begins in 1577 when Sir Francis Drake set sail from here on his three year voyage around the world. In 1588, he again left Plymouth Harbor to meet the Spanish Armada which the English soundly defeated. Sir Walter Raleigh left from here on his New World voyages. In 1919, the U.S. Navy seaplane NC4 touched down in Plymouth Harbor after making the first Atlantic Ocean air crossing.

A small group of Pilgrims from the town of Scrooby, seeking religious freedom in the New World, set sail in 1620 on the Mayflower. There is a memorial and plaque at Plymouth Harbor honoring those who included William Bradford. Born in Yorkshire, he spent most of his growing years in Scrooby, England, with like-minded Puritans. After landing in America, the  new site was promptly named Plymouth; Bradford became its longest serving the Governor. His diary, Of Plymouth Plantation, details the strong Christian foundation these brave people sought to establish in America. The diary is in striking contrast to newer histories which downplay the real reason for the Mayflower Pilgrims’ decision to leave their homeland in search of religious freedom.

Take time to visit the Mayflower Centre, a small museum with the history of the Pilgrims and their voyage. If the weather then was anything like it was the day we visited Plymouth, I can completely understand anyone who decided not to board a small vessel headed for the huge sea swells we could view just across the bay. It was miserably cold; the winds were gusting enough to sweep water up onto anyone standing at the harbor ledge.

Walking away from the harbor onto the narrow brick streets you can see houses which literally hang over the street from above. Houses were built narrow at the bottom because taxes were levied on the size at ground floor, but as the additional stories were added, they extended each another foot or two. From the street level looking up, you may not even see the sky between houses that meet each other on the third floor.

It was in Plymouth that we found great little “junk” shops and used book stores. Fish and chips are always better when eaten right at the shore and a good hot cup of English tea slakes the chill.

View from the Harbour 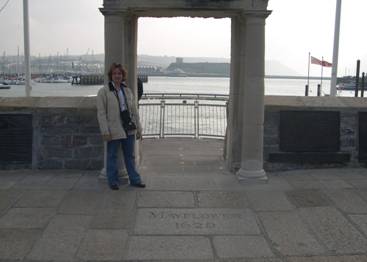 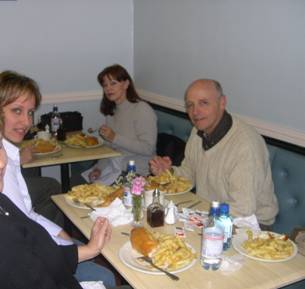