Checking out of the London hotel to head north for Kettering in the English Midlands, we catch our train at the Historic St. Pancras Station. Built during the reign of Queen Victoria, it was originally a main depot for the city. Soon the building became too old and small for the traffic so Waterloo and Charing Cross Stations were built to accommodate the Chunnel traffic on high speed trains. Recent grass-roots efforts have restored the beautiful Gothic and Revival style St. Pancras to more than its former glory. The 100 foot high glass ceiling covers a mini-mall of upscale shops and restaurants. The new depot houses three connections: local and express trains, 27 Eurostar departures to European destinations, and access to the Underground for all London stops.

Our two hour ride allows us to relax on very comfortable and efficient trains while being served great English tea and biscuits (what they call cookies and sweet treats). Wide windows enhance views of Cotswald sheep, quaint villages, and many stately church spires dotting the countryside. It’s a time we can slow down from the pace of busy London and enjoy the more traditional English atmosphere.

Kettering is a small town of picturesque history. It was here in 1792 that Andrew Fuller invited William Carey to present his missionary zeal to the congregation of Fuller Baptist Church which still holds services on Gold Street. This church was the starting point of the active missionary work of William Carey, founder of Baptist missions. There is a very worthwhile museum in the church containing letters, artifacts, and pictures of Fuller, Carey, and the Baptist Missionary Society’s work. A short distance from the church is the home of Widow Wallis who opened her rooms for their meetings. Fuller told Carey that he would “hold the ropes” for the Mission Society while Carey went to India as the first missionary. This was a life-long commitment Fuller kept, and Carey spent the rest of his life converting the lost in India. 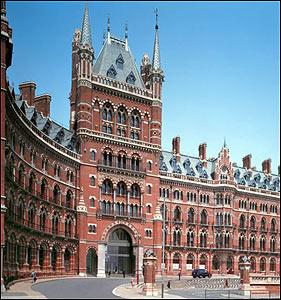