Our primary focus in Edinburgh is on the life of John Knox, the Reformer who fought Mary, Queen of Scots, for the right to form a new church outside of the state established church (churches are called Kirks in Scotland). On the Royal Mile of Old Town Edinburgh is John Knox’s home and his church, St. Giles Cathedral.  St. Giles is open weekdays for visitors and the only charge is for taking pictures (2 pounds). This spectacular Cathedral has been renovated only for safety so what you see is as it was in Knox’s day with few changes. The original pulpit is there among many of the church’s original baptismal fonts, chalices, and other service items.

Knox was buried in the church yard which was later paved over to make parking for the church services, but his place is marked at parking spot # 23.   Almost directly across the street from the church of this great preacher stands a statue to one of the most anti-Christian humanists of his day, David Hume. What a sad commentary that the Scots consider these two men worthy of equal honor.

The home of John Knox is open for tours (3 pounds) and while it contains artifacts of his life, it is somewhat commercialized. Next to the house is the little unassuming church front of the Carrubbers Christian Center, which D.L. Moody proposed and financed while preaching in Edinburgh. A few blocks off High Street at the Grass Market Square, you can view the memorial to those executed for their religious fervor.  The peculiar name comes from the place having been a grazing spot for livestock while the owner was in town.

There’s also the now famous Rosslyn Chapel about a 30 minute bus ride from Edinburgh. Docents quickly point out that not one shred of evidence has been uncovered there to substantiate Dan Brown’s claims in his book The DaVinci Code, but they are most grateful for the flood of tourist money from the curious. What is interesting are the walls which are completely covered with carvings of the Knights Templar, the Masons, and even the faces of the builders and caretakers. It’s like a crypt with everyone’s eyes open! 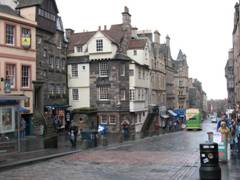 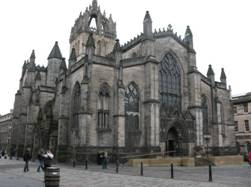