The two most well-known cathedrals in London are St. Paul’s and Westminster. As an Abbey, a monastery for the monks to live and train in, Westminster’s history dates back to the first millennium. King Edward, who built the church addition, died 16 years before its completion in 1065. But it was Harold, the Saxon king, and William the Conqueror, who both chose Westminster for their coronations (1066 A.D.) that sealed its fame as the beginning place for all future sovereigns. From that time forward, most kings, queens, and notables have sought to be buried there also. Besides hundreds of royalty and clergy in a total of over 3000 tombs, you can see the vaults of Geoffrey Chaucer, T.S. Eliot, Lewis Carroll, John Milton, and George Frederick Handel among the 118 literary figures buried there.

It was Henry VIII (Tudor), desiring to divorce his first wife, Catherine of Aragon, who broke from the Catholic Church when it would not grant his divorce and began his own church, the Church of England. His two daughters, Mary (Bloody Mary) who was born to Catherine, and Elizabeth I, born to his second wife Anne Boleyn, fought over the throne. Ironically, they are buried one on top of the other in the same tomb at Westminster.

St. Paul’s Cathedral is England’s national church and the masterpiece of Sir Christopher Wren. A combination of Anglican and Episcopalian services centered around the Book of Common Prayer take place weekly in this massive structure. The Nave (the center hall) is open for visitors to enjoy the music and messages each Sunday. Reverence is expected and commanded by ushers for those not obliging. There are tombs, but nothing to match the scope of Westminster. You can enjoy lunch in the Crypt Café, of course down in the cellar.

A common phrase, robbing Peter to pay Paul, became popular during the reign of Edward VI when England’s government “borrowed” part of the income belonging to St. Peter’s Chapel (housed in Westminster) to pay for needed maintenance on St. Paul’s (Bartlett’s Familiar Quotations; 141:27). 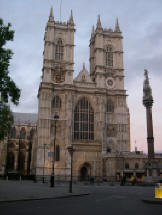 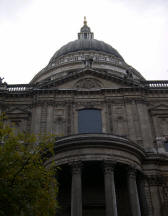