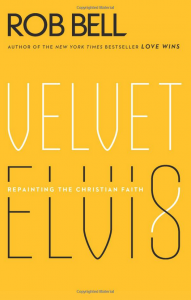 Velvet Elvis was written in 2005 and is Bell’s first book. This book  is as clear a statement on the theology and theological method of Bell as there is. It also includes a clear discussion regarding his views of heaven, hell, and salvation (see chapter 6) which appear in Love Wins.

I am a little surprised that there is such a stir and surprise today about Bell’s theology. Velvet Elvis was published six years ago and mentions most, if not all, of what is stated in Love Wins. Many of the critiques issued toward Love Wins can also apply to Velvet Elvis.

Having read a good number of older liberal and neo-orthodox writers, Bell has some interesting similarities. There is a similarity to F. D. E. Schleiermacher’s emphasis on intuition; Walter Rauschenbusch’s kingdom ideas and eschatology; the need to forfeit the first century metaphors as Rudolf Bultmann made famous; and Paul Tillich’s existentialism which sees salvation as acceptance. It must be noted that Rob Bell also has a clear postmodern emphasis, particularly in his insistence on the primacy of narrative.