Studies in the Epistle to the Hebrews 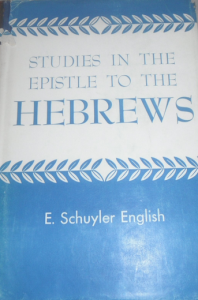 Most are familiar with English’s work, Re-Thinking The Rapture, but may not be aware of his great commentary on the book of Hebrews.  This was first printed in 1955 by Loizeaux Brothers.  This is a detailed work similar to William Newell and is trustworthy in matters of types, covenants, and law vs. grace.