The Question of Freemasonry and the Founding Fathers 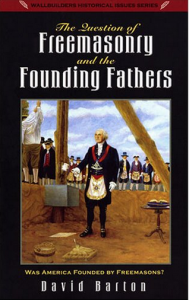 I’ve only recently found a few of David Burton’s books recommended to me by a friend.  I learned a lot from this short book on the Freemasons.  Burton’s premise is that America’s founding fathers were not as involved in Freemasonry as many would have us believe, and that those who were, were not involved very much, and that even then Freemasonry was not at all  what it is today.  With over 300 footnotes in a little over 100 pages of text, Burton does a thorough job of presenting material from both sides.

Burton presents the history of masons as they progressed from stone masons to a society.  He dispels modern Masonic claims to biblical history and characters.  He presents five periods of their history in America:  from 1730s through the Revolution; the corrupting influence especially around 1813 when Masonry opened up to a pluralistic belief system; the period of demise in the middle 1800s; the period of revival in the late 1800s; and modern Masonry of the 20th century which is totally unchristian.  His point is that even if founding father like Washington (whom he spends much time on) were members, it was little more than a club, or like joining the WMCA or the Salvation Army in its early days.  Washington once wrote, “The fact is, I preside over none [of the lodges], nor have I been in one more than once or twice within the last thirty years.”

Burton does not believe the symbols on the dollar bill came from any Masonic connection and shows their history as they were commissioned to be made.  He debunks the idea that Washington DC is laid out to picture a Satanic pentagram.  He also explains that the common pictures of George Washington in Masonic regalia were all done after the fact.  For example, the one of him so dressed laying the cornerstone for capital building was actually done in 1993 by John Melius, a 33rd degree Scottish Rite Mason.  BTW, the Great Seal of the United States (with the Eagle) was actually designed by Charles Thompson, Secretary of Congress (1774-1789) who was not a Mason.  Actually this is the Thompson who was the author of the Thompson Bible, a Christian theologian, and therefore the Great Seal had nothing to do with Freemasonry.  Burton argues that Thompson’s involvement with the pyramid and the all-seeing eye was not Masonry either, and that NOVUS ORDO SECLORUM is not “A New World Order” as many think, but is “A New Order of the Ages” which Thompson said, signifies “the beginning of the new American Era, which commences from that date [1776].”