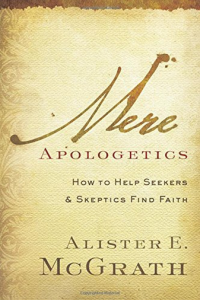 I have generally enjoyed books by Alister McGrath.  He is a professor at King’s College in London and president of the Oxford Center for Christian Apologetics.  He is basically a mid-stream evangelical who you really identify with at one point and are really frustrated with at another.  For example, in this book he is really good at giving help in approaching atheists, but runs with the theistic evolutionists.  He gives very good help in dealing with contemporary issues such as Dan Brown’s Divinci Code, but leaves narrative interpretation open to discussion.  He criticizes postmodernism intellectually, but believes it gives us good tools for reaching the current culture.

I did enjoy and profit from his discussion of how to approach the questions of how a good God can allow bad things to happen, and also whether our world shows more signs of a Creator than not, and that atheism is as much of a crutch to atheists as they accuse Christianity being a crutch to Christians.  In any way, this is a worthwhile read to brush up on apologetics in an increasing atheistic and amoral world.  RCS

“The cross liberates us from the fear of death and the need to live a lie.  It acts as a powerful antidote to our natural tendency to be frightened or anxious about our situation in the world.  It allows us to face death with a quiet and calm confidenc …

“The task of apologetics is therefore to prepare the way for the coming of Christ, just as someone might clear rocks and other roadblocks from a pathway.” Alister McGrath, Mere Apologetics, p. 22.

“Apologetics does not and cannot convert anyone.  But it can point people in the right direction by removing barriers to an encounter with God, or opening a window through which Christ can be seen.” Alister McGrath, Mere Apologetics, p. 43.