Dispensational Understanding of the New Covenant 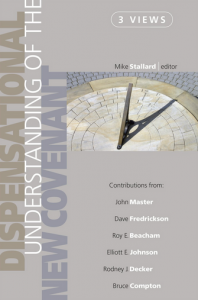 Regular Baptist Press released this book at the end of 2012.  It is of interest to me because I consider myself a traditional dispensationalist and also because I know some of the authors.  The book is a result of discussions that have taken place at the Council on Dispensational Hermeneutics which has met periodically since 2009 at Baptist Bible Seminary, Clarks Summit, PA, where Mike Stallard is professor of Systematic Theology.  I’ve never attended the meetings but they always sounded interesting.  I don’t know Mike Stallard but I know one of the contributors well, Roy Beacham, because we were classmates at Central Seminary.  I know Rodney Decker through email correspondence and I met Bruce Compton when he was connected with Denver Baptist Theological Seminary in the early 1980s.  I wish I could have even heard Elliott E. Johnson speak at some time but I’ve only had the privilege of reading his works over the years.