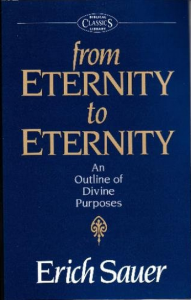 This third book was first published in 1954.  It includes Sauer’s dispensational chart which is a large fold-out chart glued in the back of the book.  On this chart the rapture is pictured as pre-tribulational.  Sauer scans the entire Biblical history and then, at great length, answers thirteen objections to the literal nature of the millennial kingdom.  Though he sees the church comprised of saints of all ages and denies a bonafide offer of the kingdom by Jesus, Sauer does defend pretribulational premillennialism, the cessation of miraculous gifts with the apostles, and animal offerings in the millennium.