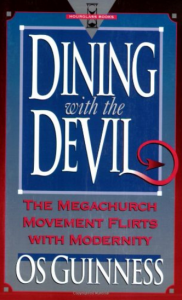 I had read Os Guinness before but was recommended this 1993 book by a friend.  The sub-title is The Megachurch Movement Flirts With Modernity. In chapter one, titled “One Main Question”, Guinness asks, “In implementing its vision of church growth, is the church of Christ primarily guided and shaped by its own character and calling—or by considerations and circumstances alien to itself?”

In the introduction he writes, “Ever since the early days of modernity in the eighteenth century, a pattern of response to modernity has grown strong.  Liberals have generally tended to surrender to modernity without criticizing it; conservatives have tended to defy modernity without understanding it.  This tendency has been reversed in the last generation as more progressive evangelicals now court the ‘affluent consumers’ of the gospel as ardently as liberals once courted the ‘cultured despisers’ of the gospel.  The two main examples today are the megachurch leaders marrying the managerial, and the Christian publishers romancing the therapeutic.”