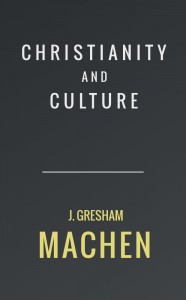 On Kindle, when you finish one book by a certain author, it suggests a few others by the same author. Though I have read many by Machen, I had not seen this one. It is especially interesting to read men from a century before and see how they viewed culture (see my reviews on C.S. Lewis or T.S. Eliot). Machen describes three positions that one could take about the culture: “In the first place, Christianity may be subordinated to culture.” “The second solution goes to the opposite extreme. In its effort to give religion a clear field, it seeks to destroy culture.” “A third solution, fortunately, is possible—namely consecration. Instead of destroying the arts and sciences or being indifferent to them, let us cultivate them with all the enthusiasm of the veriest humanist, but at the same time consecrate them to the service of our God.”
I am afraid this third approach may be misapplied in our day, when we are so in love with the culture that we can’t tell the difference between it and the world. Machen would have been fairly shocked by the church’s use of culture in worship today. He concluded the book this way, “The church is puzzled by the world’s indifference. She is trying to overcome it by adapting her message to the fashions of the day. But if, instead, before the conflict, she would descend into the secret place of meditation, if by the clear light of the gospel she would seek an answer . . . an age of doubt might be followed by the dawn of an era of faith.”