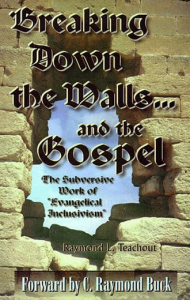 The subversive work of “Evangelical Inclusivism”

Raymond Teachout is the son of Richard Teachout, Robert’s brother.  They are children of Dick and Oril Teachout, long-time missionaries in Africa.  Raymond wrote this book in 1999 and I am sorry that I hadn’t known of it sooner.  There is still a lot of literature explaining the ecumenical compromise of the earlier and mid 20th century, but not very much that follows up on the inclusive nature of that compromise to the end of the century.   Raymond gives good detailed analysis of the evangelical-Catholic hand-holding now going on among well-known evangelical leaders and their Catholic counterparts.  He shows that the current push to engage Catholics in dialogue (ECT, The Gift of Salvation, et al) necessarily begins with the assumption that all are brethren and must be treated as brethren.  Therefore, the doctrinal differences that separate evangelicals and Catholics are merely squabbles among fellow believers.  Any attempt at evangelizing “brethren” becomes anathema.  I also enjoyed Teachout’s observation that the emphasis on presenting various views of doctrinal subjects often relegates doctrine to one’s “view” of doctrine in a sort of relativistic way.