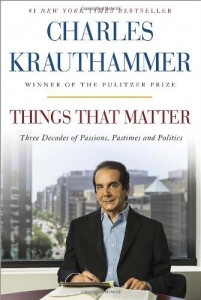 We have all been encouraged by the life story as well as the writings of this conservative commentator. For the Christian, there are a few things that cannot be accepted. Krauthammer does not believe that life begins at conception (p. 200) nor does he believe that creation is acceptable science (p. 210). However, his essays on the nation of Israel in relation to America are great, and his three last essays on America and the World are themselves worth the price of the book. His description of the new liberalism seeing America as fatally flawed and therefore undeserving of the position of a world power; and his option of America using the “unipolar world” (America as the ONLY world power) for a realistic global democratic example, are great.

“We find in the rules laid down by the greatest English judges, who have been the brightest of mankind:   We are to look upon it as more beneficial that many guilty persons should escape unpunished than one innocent should suffer.  The reason is, because it is of more importance to the community that innocence should […]

The Christian in an Election Year

Election year comes every four years, like it or not.  I don’t necessarily, even though I watch more cable news and read online news than in any other year.  When we could be anticipating March Madness and the NCAA tournament, we are more embroiled in Super Tuesday and March Sadness.  It saddens me because the […]