The Rise and Fall of Adolf Hitler 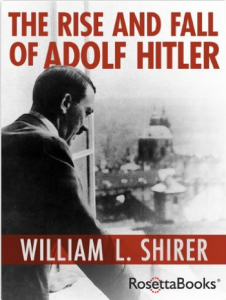 Shirer is best known for his book, The Rise and Fall of the Third Reich.  He was an American journalist and war correspondent in Berlin during WWII.  Shirer often heard Hitler speak and observed his rise and fall first hand.  This small book is the best “quick” read of the life of Hitler that I’ve read (copyright 1961).

Most alarming paragraph:  “This attitude of the Germans puzzled me when I came to live and work in Berlin soon after Hitler came to power.  I had thought that all men and women of the Western world valued personal freedom above all else in life.  To my surprise I found that few Germans seemed to mind that their individual liberties had been taken away.  They seemed unconcerned that so much of their fine culture was being destroyed and replaced by a mindless barbarism.  And they seemed strangely unaware how Hitler was tricking them.”