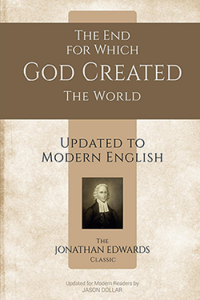 Jonathan Edwards (1703-1758) is best known for his role in the Great Awakening and his sermon, “Sinners in the Hands of an Angry God.” Edwards was one of the greatest theological minds America has ever produced. I read this well-known work on Kindle, and I must say, I had to wade through it more slowly than usual. Edwards was proposing, of course, that God created the world for His own glory. He writes, “Why has God created the world? When God answers that question, he does not slip from his own mind. His ultimate goal in creating the world is to plainly show a supreme honor and respect to himself. He has clearly stated this to us. Furthermore, he is self-sufficient, unchanging, and absolutely independent of any other being. Therefore, he is morally obligated to show the highest honor to himself, a fact that he is unable to forget.” Since there is nothing higher or holier, or more good than God, everything that exists is best when it mimics Him. In fact, God loves what He is ultimately for this reason.

He then writes, “This leads us to the reality that the creature’s true good and God’s adoration of himself, are both united as one thing. They are not divided goals. After all, the happiness that the creature aims at is a happiness that is only found when he is in union with God, and this union is what brings God glory. In fact, true happiness will rise no further than the height of union between the creature and God. A man’s level of happiness and his level of union with God rise and fall together. The more true happiness he has, the greater the union he has with God. So when God makes the happiness of the creature his ultimate end, he is making his own glory his ultimate end.”