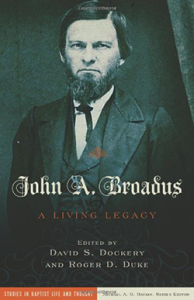 This new biography was written in 2008, so it is not “new” but is most recent. John Broadus (1827-1895) was one of the founders of Southern Seminary and was a preacher, author, and seminary professor. Most students today would know him as the author of one of the most enduring textbooks on homiletics, Preparation and Delivery of Sermons, first published in 1870. Broadus once met Charles Spurgeon, who later wrote, “I was delighted to see Dr. J.A. Broadus. His book is invaluable.” Second only to that volume was his commentary on Matthew in An American Commentary on the New Testament, edited by Alvah Hovey, in 1886. In this volume Dockery and Duke present ten chapters by various authors covering Broadus’ life and works, including a chapter by Dockery, “John A. Broadus and His Influence on A.T. Robertson and Southern Baptist Life.” Much of the volume is a tribute to Broadus as a founder of the seminary, preacher and author, and statesman. Some interesting facts about Broadus are: that he sat under William McGuffey at the U. of Virginia where Broadus later taught; that he was father-in-law to A.T. Robertson; that he led to the Lord and baptized missionary Lottie Moon; that he was asked personally by General Stonewall Jackson to preach to the troops on several occasions; that he taught himself German, French, Spanish, Italian, Gothic, Coptic, and modern Greek; that he delivered the Lyman Beecher Lecture series (on preaching!) at Yale University in 1889; and that “Thomas Armitage, a nineteenth-century Baptist historian and pastor, published A History of the Baptists in 1887 that featured an embossed image of John Broadus on the cover.”

Some of my favorite remarks recorded in the book are: “If I were asked what is the first thing in effective preaching, I should say sympathy; and what is the second thing, I should say sympathy; and what is the third thing, sympathy;” “We have heard fears expressed lest the pulpit should die of dignity; but that is no reason why it should be murdered by irreverence;” “Robertson, who knew something about the value of historical insight, remarked at Broadus’ memorial service that his father-in-law ‘was fond of saying that history was the noblest of all human studies.’”