The Discipline of Spiritual Discernment 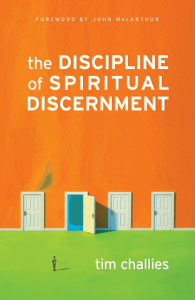 I was given this book (a 2007 book) together with Jay Adams’ book (a 1987 book) on discernment.  Challies does follow Adams a lot and even uses some of his very illustrations.  For example his biographical note on A.W. Pink, how he left church altogether because he could not find one good enough (p. 149), is taken directly from Adams (p. 51).  At the end of the book Challies also gives a journaling method to become discerning which is very similar to Adams’ some twenty years earlier.  But Challies is more up to date than Adams and gives a lot more footnotes and resources.  He also has a unique chapter on the spiritual gift of discernment.  He makes a very good statement (p. 125) on the disparity of the lists of gifts and that they are merely an example of many more gifts God gives to His whole church.  He also disagrees with spiritual gift tests.  Yet he centers on discernment and lists many ways to discover the gift and also to develop and pray for the gift.  I find a little concern in his approach to making the gift of discernment almost the controlling gift in the church.  After all, if someone has such a gift from God, who in the church would be able to disagree with him?  At any rate, his promotion for every believer to become more discerning by the Word of God is a necessary and good admonition for today.