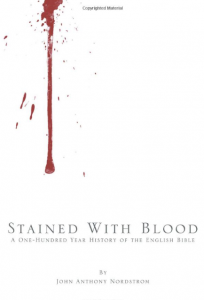 The subtitle of this book is, “A one-hundred year history of the English Bible.”  It is an excellent book and accomplishes that goal in a helpful and scholarly way.  Nordstrom praises the King James Version for being “the greatest Bible ever written” (p. 165) but also “It means we live in a translation era and not in the days of Moses, Jeremiah or Paul.  The original inspired text was inerrant; Bible translations have never been” (p. 229).  Nordstrom comes from a similar background to mine in which the KJV was used and respected but was never taken to be inerrent neither in the English nor in the Greek text from which it was taken.  He quotes the translators extensively in this same vein, “The translators were not being asked to create a new version of the Bible, but rather to revise the established version, removing any blemishes or inaccuracies” (Samuel Ward, a KJV translator, p. 196).  The book is forwarded by pastor Bruce Anderson, a good friend of mine and a scholarly pastor and user of the KJV.

I enjoy English history, especially the one hundred years covered in this book during which the King James Version was translated.  Nordstrom begins with the Latin Vulgate and shows how it was the only accepted version of the Catholic Church at this time.  From Wycliffe to Tyndale, English translations were outlawed, and the translators put to death, because the Bible in the peoples’ language would destroy the hold that the Catholic church had being the only ones who could actually read a Latin Bible.  Ironically, Jerome suffered from the same attitude in his day.  Even the Anglican church under Elizabeth and James discouraged any translation that would take away their power.  However, God in His providence brought the translating genius of Tyndale directly through a number of translations right down to the KJV whether the King realized it or not.  Nordstrom deals some with the manuscripts in the final chapters and concludes, “Why can’t we be eclectic and take the commonality of all, and place the few variatons within the margins?  That way we would have it all!” (p. 247).  A great benefit of these final chapters is the way he shows that the variations of both the Greek manuscripts and the English translations are very minute compared to the great agreement in them all.  In addition, Nordstrom believes that further translation and also comparisons among translations are all good things.  Yet at the same time he upholds the great translation history of the King James Version.  You can buy this book on Amazon for about $20 and it is well worth that.