Notice: Trying to access array offset on value of type bool in /home/greata7/public_html/aletheiabaptistministries.org/Blog/wp-content/themes/evolve/inc/dynamic-css.php on line 188
 Authorized. The use and misuse of the King James Bible - Aletheia Baptist Ministries Skip to main content

Authorized. The use and misuse of the King James Bible 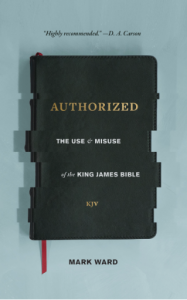 This is a 2018 book by Mark Ward, a PhD from Bob Jones University in New Testament Interpretation.  Ward is a writer and trainer for Logos Bible Software.  The point of Ward’s book is that the KJV is a good English translation but is only one of many, and that we as English readers would do best to use multiple translations to get every nuance in English of the Greek language.  Over the years I have read many books on this subject, pro and con, and I do believe Ward treats the subject as fairly and kindly as any I have read.  I do agree with Ward’s major premise that the KJV isn’t the only thing that can be called God’s Word, and also that the KJV is archaic in many ways.  However, I still use and preach from the KJV and the NKJV, while using other translations for comparison and while using the Greek a lot.  I will have to write more on that at another time.

Here are two quotes from Ward that fairly give his position.  “I’ll take up these objections, one by one, while continuing to focus on the major theme of this book:  how changes in English over the last four hundred years make it nobody’s fault that contemporary readers miss more than we realize when all we read is the KJV” (p. 88).  “I want to change the paradigm we’ve all been assuming.  Stop looking for the ‘best’ English Bible.  It doesn’t exist.  God never said it would.  Take up the embarrassment of riches we now have.  Make the best of our multi-translation situation, because it’s a truly great problem to have” (p. 137).  Ward calls old English words “dead friends.”  He means that these are good words but that they don’t give clear meaning quickly and easily to current English readers.  He argues for the use of vernacular translation because the New Testament itself was that and, in fact, the KJV was that to its own generation.

In chapter 6 Ward gives ten answers to common objections.  Rather than quote him at length, I will give (honestly I hope) a brief summary statement of his answer.  1. Why dumb down the Bible?  Ans.  Making it clearer is not dumbing it down (p. 94).  2. The KJV sounds like the Word of God.  Ans.  To the original readers it didn’t sound any different (p. 96).  3. The KJV translators made the KJV purposefully archaic.  Ans. Not so.  The translators called it “vulgar” or common language (p. 98).  4. The KJV preserves the important distinction between singular and plural pronouns.  Ans.  Even though it may, we don’t need it and can’t use it today (p. 104).  5. The English language has been debased since 1611.  Ans. Then why does this objection make sense when the text itself often does not? (p. 106).  6. The modern versions drop the important practice of using italics.  Ans. No translation is word for word and must expand the wording to some degree.  Not even the KJV is fully consistent with this (p. 108).  7. The KJV is easier to memorize.  Ans.  This is because you did so much of it in the KJV when young (p. 110).  8.The KJV is a literal translation; the modern versions are loose.  Ans.  This is true of some and not of others.  All translations are good for further clarity (p. 112).  9. The modern versions are based on inferior Greek and Hebrew texts.  Ans.  This is not the subject but in this case the NKJV (and a few others) ought to be acceptable (p. 116).  10. The problem isn’t as bad as you’re making it out to be.  Ans. Ward thinks it is more common than the average reader realizes (p. 119).  Ward’s answers to these are interesting and mostly satisfying.   He does not deal with the deeper questions of Greek manuscripts though he is capable of doing so.  His argument in this book is for the English user.

This book will become popular because it is timely.  It is recommended by a wide range of names:  John Frame, D.A. Carson, Tom Schreiner, Kevin Bauder, Andrew David Naselli, Mark Minnick.