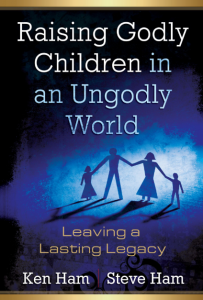 I purchased this book while visiting the Ark Encounter.  It is written by Ken Ham and his brother Steve.  It is very much a tribute to their father and his discipleship of them as they grew up in Australia.  In fact, Ken Ham writes in the Introduction, “It is part journal, part tribute, part devotional, and part ‘how-to.'”  The journal part is interesting in that the reader learns about the Ham family and especially Ken’s rise to prominence as a creation speaker and founder of Answers in Genesis.  The tribute part appears throughout the book as both Ken and Steve give honor to their father for his godly walk and example.  The how-to part of the book is their constant insistence that children need to be anchored in the Word of God and especially in the early chapters of Genesis.  Without Genesis, Ham insists, the rest of the Bible cannot be properly understood.  Without this anchor children will not have the foundation necessary to stand for his/her faith in their adult years.