On the Crest of the Wave: Becoming A World Christian 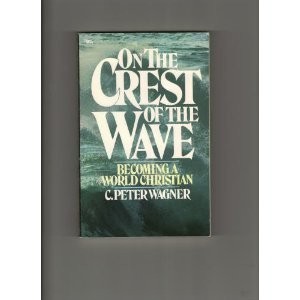 Peter Wagner has become a common name in missiology. This book fairly represents his views and opinions on modern missions. In my opinion it has much good and some bad.  Wagner warns against the dangers of universalism, the benevolent theory that all will ultimately go to heaven. He believes that everlasting punishment for the lost is a key ingredient for the urgency in missions.  He also urges prospective missionaries to make sure that they can handle cross-cultural ministry before they commit to the field on a permanent basis. He also cautions against identifying a missionary ‘‘burden’’ with a missionary ‘‘call.’’ These thoughts are good and timely.

Unfortunately, Wagner uses the book to promote the Signs and Wonders bandwagon of his friend and colleague John Wimber. He praises the success of this movement by noting the sheer numbers of participants as though that were a measure of God’s approval.

Wagner is also very broad in his view of what constitutes ‘‘Christian’’ missions. He is willing to call anything “Christian” that has the faintest similarity to Christianity.   This is an informative book but should be read with caution!