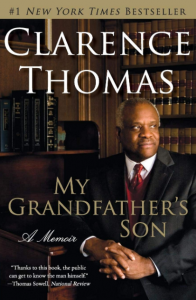 This is an autobiography of Justice Clarence Thomas.  It takes his life from birth (1948) to confirmation as Associate Supreme Court Judge.  Thomas grew up poor on the back side of the tracks in the little town of Pinpoint, GA, not far from Savannah.  It was a time of racism and difficulty for black families in the south.  Clarence Thomas hardly knew his father and was raised (and his brother Myers) by his mother.  However, when he was about 7 he and Myers were sent to live with his grandfather and grandmother.  He called his grandfather “Daddy” and his grandmother “Aunt Tina.”  The whole book is dedicated to how his “Daddy” raised him by discipline and hard work.  A few things that might not be known about Judge Thomas is that he originally wanted to be a Catholic Priest but ended up going to Yale law school.  He became personal and life-time friends with MO senator John Danforth when he was Attorney General of Missouri and gave Clarence his first law job in Jefferson City.  Senator Danforth would later guide Clarence Thomas through confirmation to the Supreme Court in the wake of the Anita Hill accusations.  The last few chapters of the book detail that confirmation.  The  book is politically interesting because you read about a poor black boy rising above his circumstances, fighting racism in the government at various levels, becoming a conservative and Republican when he was expected to follow the PC route for rising blacks.  Two interests that Thomas had that I liked were his love for Corvettes and his love of reading Louis L’Armour.  I can identify at least with the second.