Notice: Trying to access array offset on value of type bool in /home/greata7/public_html/aletheiabaptistministries.org/Blog/wp-content/themes/evolve/inc/dynamic-css.php on line 188
 Life in the Spirit ~ Aletheia Baptist Ministries Skip to main content 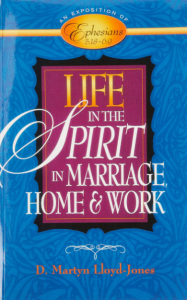 Martyn Lloyd-Jones (1899-1981) was a Welsch physician-turned-preacher who served at Westminster Chapel, briefly under G. Campbell Morgan, becoming the senior pastor in 1943 during the war years when Morgan retired.  Jones preached against liberal Christianity and the ecumenical movement.  Though leaning toward pietistic positions of the Spirit, Jones was a powerful preacher in London in the war and post-war years.  This book is one in a series on Ephesians and has special application to being filled with the Spirit and its influence on family life.

“Wine—alcohol—as I have already reminded you, pharmacologically speaking is not a stimulant; it is a depressant . . . What alcohol does is this; it knocks out those higher centers, and so the more primitive elements in the brain come up and take contro …