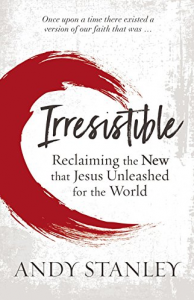 Reclaiming the New that Jesus Unleashed from the world.

By writing this book, Andy Stanley has taken a big step into questionable Bibliology.  He has written with a positive motive:  wanting to win our current generation to Christ, a generation that has either left the faith or will not come to the faith because of their distrust of the Bible.  The reason for this, Stanley says, is that the Old Testament is very difficult for seekers to believe or verify, but also, that the Old Testament (he prefers “Old Covenant”) has ended and Christianity is based on the New Testament (“Covenant”).  The Old Testament, then, is of little to no use for the New Testament believer.

Therefore, Stanley says on page 72 (of 322 pages), “But I hope you’ll be more than disturbed.  By the time we’ve finished our journey together, I hope you’ll be ready to unhitch your faith, your theology, and your lifestyle once and for all from the old  that Jesus came to replace.  And I hope you will fully embrace the new Jesus came to unleash in the world, for the world.”  It is difficult in a short review to retrace all of his steps in this argument, but I will try to give a fair overview of where Stanley takes the reader, give some positives and negatives, and list a few very questionable statements.

■ Stanley prefers calling the Old Testament the old “covenant.”  To him, this refers to the Mosaic covenant with Israel but at times he uses the term to refer to the whole Old Testament.  So by showing that the Mosaic covenant has been done away (and properly so), he ends up saying that the whole Old Testament has been done away.  After quoting Rom. 7:6 that the law had been done away, he writes, “Jews were accountable to a ‘written’ code, the law of Moses.  But under the new covenant, we are accountable to the Holy Spirit.  Big difference” (p. 138).  But then a few pages later he writes, “Bottom line, if Paul had been around in the fourth century when the bishops and theologians were brainstorming titles for the major divisions of what would eventually be called the Bible, I’m pretty sure he would have opted for the term obsolete over old.  It’s not pithy, but it’s accurate” (p. 140).  This becomes a major problem in following what Stanley is saying we should “unhitch.”  Are we to put away the Mosaic covenant or our whole Old Testament?  After all, the Mosaic covenant was only the last 1500 years of a 4000+ year Old Testament.  In addition, the “law” that is done away is contained in only four of the first five books of the Bible.  Should we also do away with the Psalms, Prophets, and History books?  It seems he would say yes.  He writes, “The designation Law and Prophets included the writings not technically considered law or prophecy.  In the first century, this designation included the history and poetic literature as well.  So, if you really want to follow Jesus’ example, drop the Old Testament and start referring to the first half of your Bible as the Law and the Prophets.  If that seems a bit over the top, just go with the Hebrew Bible” (p. 281).

■ At times Stanley seems to be able to draw principles from the Old Testament and make good application to the New Testament believer.  But for the most part he does not even feel we should make any application from the Old Testament.  He writes, “If you read Paul’s epistles carefully, you’ll discover that while he considered the old covenant Scripture, he didn’t consider it binding.  Just the opposite.  For Paul, the Old Testament narratives provide new covenant folks with encouragement, context, and hope—but not applications to live by” (p. 202).  In other places he writes, “While the Old Testament is not our go-to source for application, it is a fabulous source of inspiration.  Old Testament narratives are rich in courage, valor, and sacrifice” (p. 167).  “Paul never sets his application ball on an old covenant tee” (p. 168).  “I too, was taught from childhood that every word in the Bible is God’s Word and, consequently, it’s all equally important and applicable” (p. 168).  But Stanley does not differentiate what or how any part is “applicable.”

■ Stanley rightly points the gospel to the death, burial, and resurrection of Christ.  But, he argues, since the first century believers didn’t have the “Bible,” they only evaluated moral and behavioral issues on the basis of “what does love require of me” (p. 233).  He even writes, “When it comes to sexual purity, the Bible is a mixed bag with mixed messages.  The New Testament isn’t.  But the entire Bible, especially the Old Testament, certainly is.  But even the New Testament authors don’t address consensual premarital sex directly” (p. 140).  The New Testament “rule,” according to Stanley, is to ask what love requires of the person toward the other person.  Ironically (I believe) this perspective of moral direction also eliminates the need of the New Testament as well as the Old.  This might be, though Stanley doesn’t use the term, an example of what is today called “redemptive hermeneutics.”

■ I want to say that Stanley says some good things.  He does not deny the inspiration of the Old or New Testaments.  He is only talking about the use and application of them.  He properly sees that the law of Moses was done away when the new age came.  His confusion is over what the “old covenant” means.  He criticized the allegorizing by many New Testament scholars in an effort to make the Old Testament law fit the New Testament.  I agree, but he doesn’t deal at all with the prophecies that extend far beyond the New Testament.  I take Stanley at his word that he is concerned about how people hear and receive or reject the gospel.  We all should be.  But it seems to me that Christians for two thousand years have believed the best way to do that is to be absolutely committed to the veracity of the whole Word of God.

■ I will add some of Stanley’s uncareful statements below.  I believe they are in context though, as you will see, they surely need further explanation.  However, the statements also stand on their own regardless of an explanation.

“It doesn’t help that both covenants are bound together for our convenience.  The majority of people I’ve talked to who’ve abandoned their faith have lost faith in Jesus because they lost confidence in the Bible.  Which part of the Bible? You guessed it—the part that doesn’t apply or include us—the Old Testament” (p. 110).

“Jesus treated the Hebrew Scriptures as authoritative.  Paul insisted they were God-breathed.  Peter believed Jewish writers were carried along by the Holy Spirit.  But they never claimed their faith was based on the integrity of the documents themselves” (p. 158).

“On the other hand, there are principles, both stated and illustrated, throughout the Old Testament.  Lots of sowing and reaping.  Proverbs is full of common sense cause-and-effect relationships.  Solomon’s financial suggestions alone are worth the price of a genuine leather-bound study Bible.  But for the record, don’t do anything because Simon and Solomon say.  They are not the bosses over you” (p. 166).

“Not surprisingly, Paul doesn’t leverage the old covenant to establish the standard for Christian morality.  He leverages the believer’s inclusion in Jesus’ new covenant” (p. 204).

[Paul said], “But whatever were gains to me I now consider loss for the sake of Christ.”  Stanley says, “His whatever bucket was categorized and organized around the Jewish Scriptures.  Our Old Testament.  Paul dismisses the primary relevance of the Scriptures he grew up with” (p. 208).

“The reason Christians should tell the truth is inexorably linked to the gospel, not a verse in the Bible.  The issue isn’t that it’s written in a religious book” (p. 239).

“If we’re willing to migrate from our The Bible says-based faith and sink our roots into the fertile, blood-soaked soil of new covenant morality, much of what makes us to resistible will eventually evaporate” (p. 274-275).

“Christianity can stand on its own two new covenant, first-century feet.  The Christian faith doesn’t need to be propped up by the Jewish Scriptures” (p. 278).

“The foundation of our faith is not an inspired book.  While the texts included in our New Testament play an important role in helping us understand what it means to follow Jesus, they are not the reason we follow.  We don’t believe because of a book; we believe because of the event that inspired the book” (p. 294).

“In light of the post-Christian context in which we live, it’s time to stop appealing to the authority of a sacred book to make our case for Jesus.  In the information age, that habit unnecessarily undermines the credibility of our faith.  It makes our message unnecessarily resistible” (p. 303).

“’The Bible says’ establishes the Bible, as in everything in the Bible, as equally authoritative.  It’s not.  If it is, we have a schizophrenic faith because, as we’ve noted, the Bible contains two covenants with two different groups for whom God had two different agendas” (p. 307).

“The trustworthiness of the Bible is defensible in a controlled environment.  It’s not defensible in culture where seconds count and emotions run high.  So I changed my approach along with some of my terminology” (p. 314).