Can Man Live Without God? 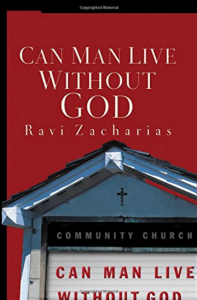 Ravi Zacharias is fast becoming the Josh McDowell of the 90’s. He is in constant demand at the world’s leading educational institutions. This book (his first, A Shattered Visage: the real face of atheism, should also be read) is the result of lectures given at Harvard and Ohio State universities arguing Christianity’s unique answer to the world’s most urgent questions. He writes in the introduction, ‘‘Here the greatest question of our time must be considered: Can man live without God? It must be answered not only by those who are avowedly antitheistic, but also by the many who functionally live as if there were no God and that His existence does not matter.’’

Zacharias was born in India, the last of a line of Hindu priests. His perspective on Christianity as opposed to the emptiness of Islam, Hinduism and Buddhism, is an invaluable contribution to the growing problem of Eastern religious influence in this country. This book will definitely open some cobwebbed thinking processes.