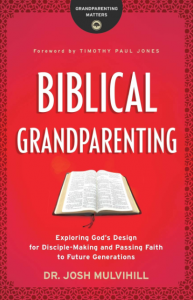 Josh Mulvihill wrote his PhD on this subject for Southern Baptist Theological Seminary and then published this book in 2018 (Bethany House).  It is a much needed book on an important topic.  He writes in the first chapter, “There are millions of Christian Grandparents in America today with few resources to equip them to accomplish the role God has given them in Scripture.  At the time of my study, there were fewer than a dozen books, one DVD series, and one ministry that existed to support all Christian grandparents.”  He is here speaking of resources from an evangelical Christian point of view.  The great benefit of this book is the amount of information, surveys, comparative research, and interviews done by the author.  The book is loaded with quotable material.  For example, “The U.S. population demographic growing most quickly is those over the age of sixty five.  They represent more than a quarter of the entire U.S. population, seventy-eight million in total.  Approximately 7,918 people turn sixty-two each day” (p. 52).  But Mulvihill says, “In scholarly literature, the religious/spiritual facet of the grandparent-grandchild relationship has been neglected.  Research of this topic is limited to the sociological and psychological arenas and is almost nonexistent in the pastoral-theological perpective” (p. 53).

The author gives a solid view of the biblical role of parenting and grandparenting in chapter 2.  He then brings the reader up-to-date on culture’s perspective in chapter 3, with an informative section on the history of grandparenting in America.  In chapter 4 he breaks down four general approaches among believers to the role of grandparent.  These are: the encouraging voice, the supportive partner, the loving friend, and the disciple-maker.  Mulvihill’s point of view is that a grandparent must place the last approach, disciple-maker, as the first priority.  He has shown that it is a distinct biblical role that the grandparent teach salvation and Christian growth to the entire family, especially to grandchildren.  By chapter 7 he is discussing how to disciple grandchildren giving 8 general ways:  asking questions, blessing, intentional meals, prayer, teaching, reading and memorizing the Bible, telling God-stories, sharing the gospel. Some testimonies of parents are given emphasizing each method.

My negative to the book is that it very much reads as a dissertation.  It is first a book of information on the current status of grandparents in America and the church.  Less time is spent on practical ways to be a good grandparent and those are mostly given in general terms.  The book is needful and well worth the price and time to read.  It will pack your head full of facts, but those facts are a good place to begin.