Biblical Foundations for Manhood and Womanhood 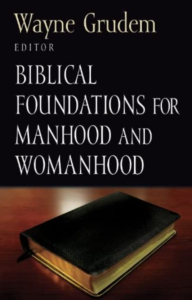 It was in 1991 that Wayne Grudem and John Piper edited Recovering Biblical Manhood and Womanhood. The current work, edited only by Grudem, written in 2002, was originally addresses done at a conference in Dallas, TX. The major messages in the book are done by Grudem and Bruce Ware with single chapters by five other authors. These are an update on the ongoing issues of family life relating to submission, headship, and complementarity. Although the writings are now 20 years old, these issues continue to be central in family and church life. Grudem does a long chapter on the Greek word for “head” (kephale) showing that the word never means “source” alone (feminism’s long-standing contention) in the New Testament and is always used of a person who has leadership over another. Grudem also does a chapter titled, “The Myth of Mutual Submission as an Interpretation of Ephesians 5:21.” He shows that “submission” (hypotasso) is never used of a husband’s submission to the wife. In addition, “one another” (allelous) in 5:21 must take the meaning of “some to others” and not “everyone to everyone.” Bruce Ware’s contribution relates to the headship within the trinity and its relation to complementarity. He writes, “Arguments will be weighed, and support will be offered for the church’s long-standing commitment to the trinitarian persons’ full equality of essence and differentiation of persons, the latter of which includes and entails the eternal functional subordination of the Son to the Father, and of the Spirit to both Father and Son.” Submission then, as seen in 1 Cor 11:3, always flows one-way from the head.