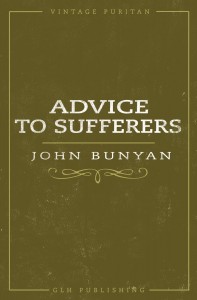 Having read as much of Bunyan that I could, including The Pilgrim’s Progress several times, I have to rate this lesser known treatise at least second to the great classic. The editor of the reprinted edition writes, “This valuable treatise was first published in a pocket volume in 1684, and has only been reprinted in Whitfield’s edition of Bunyan’s works, 2 vols. Folio, 1767.” Bunyan was especially qualified to write on suffering, spending almost thirteen years in jail for preaching the gospel and in constant fear of losing his life either by death or by unending incarceration. From that jail on the river Ouse he could see to the south the church where John Gifford (the “Interpreter?”) had led him to Christ; to the east he could see the place in the river where Gifford had baptized him; and to the north he could see the small barn-like building where his church met, and beyond that his very home where his wife and children waited for his return. When he was finally released he continued to pastor the small congregation for the rest of his life. Bunyan died after riding to London in inclement weather and developing a bad cold. He was buried in Bunhill Fields, the Dissenter’s Graveyard, rather than being returned to his home in Bedford.

Here are a few excerpts. “This is the advice that, I thank God, I have taken myself; for I find that there is nothing, next to God and his grace by Christ, that can stand one in such stead, as will a good and harmless conscience.”

“Why, affliction is better than sin, and if God sends the one to cleanse us from the other, let us thank him, and be also content to pay the messenger.”

“I am not so uncharitable, as to think, that persecuting men design this. But I verily believe that the devil doth design this, when he stirs them up to so sorry a work. . . . This is the case: men when they persecute, are for the stuff, but the devil is for the soul, nor will any thing less than that satisfy him.”

“He also that suffereth for righteousness’ sake, doth it also because he would not that sin should cleave to the worship of God; and, indeed, this is mostly the cause of the sufferings of the godly. They will not have to do with that worship that hath sinful traditions commixed with God’s appointments, because they know that God is jealous of his worship.”

In an interesting section Bunyan addresses the question of whether it is ever right to avoid suffering if possible. “First, having regard to what was said afore about a call to suffer; thou mayest do in this even as it is in thy heart. If it is in thy heart to fly, fly: if it be in thy heart to stand, stand. Any thing but a denial of the truth. . . . Objection: but if I fly, some will blame me: what must I do now? Answer: And so many others if thou standest; fly not, therefore, as was said afore, out of a slavish fear; stand not, of a bravado. Do what thou dost in the fear of God, guiding thyself by his Word and providence; and as for this or that man’s judgment, refer thy case to the judgment of God.”