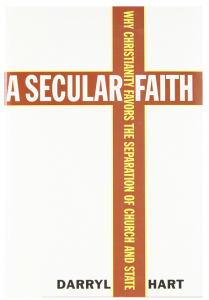 I had not read Hart before this book, and only then because I found him quoted a lot by D.A. Carson regarding culture.  Hart, a Westminster Seminary, Harvard, and Johns Hopkins graduate  writes very fairly about conservatives in a mixed religious and secular culture.  I liked his view that the church should be kept the church in its purpose and focus, while its members live by faith in a secular society.  Separation of church and state has been a Protestant experiment that has worked in the United States of America but is in danger of losing its way when Christianity (or Christendom) begins to leave its main task of preaching the gospel, and when the state leaves its main task of protecting its law-abiding citizens.  He writes,

“The United States affords Christians remarkable freedom to worship according to the demands of their religion and the dictates of their conscience, a freedom unparalleled in the records of human history.  To conceive of those instances where Christians do not receive public affirmation or state sanction for their convictions or practices as treatment bordering on tyranny is to trivialize the many instances throughout church history of persecution and martyrdom.” (71)