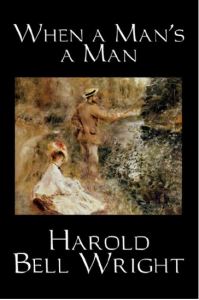 I have finished the eighth of nineteen HBW books.  I think this has been one of the best so far.  Admittedly, you have to like westerns and cowboys, but most of us have such a little boy inside somewhere.  The original publisher for Wright’s first nine books was The Book Supply Company.  This one was first published in 1916.  Strangely, Wright’s earlier books are easier to find and less expensive than his later books.  The last three or four that he wrote may go for as much as $500+.  The books always contain a strong moral strain with a Christian perspective.  Wright is best known for his second book:  The Shepherd of the Hills (1907) and for his connection with the Branson, MO area.  Actually, it was the tourist interest around Old Matt’s Cabin and Inspiration Point (from the book) that sparked the original tourist interest in the Branson area.