This World: Playground or Battleground? 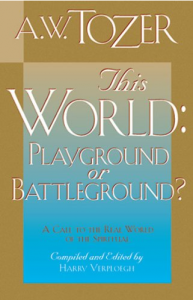 What Christian doesn’t enjoy another book by A.W. Tozer?  After all that I have read of Tozer over the years, this title was brought to my attention in a recent article and I had not read it.  The publisher’s forward (for Wing Spread Publishers, Camphill, PA) explains that these writings were originally editorials that Tozer wrote when he was editor of the Alliance Life, the official magazine of The Christian and Missionary Alliance.  These editorials were made into books after his death in 1984.

The whole book is typical Tozer.  In the chapter titled, “Men, Our Most Critical Need,” he writes, “The most critical need of the Church at this moment is men—the right kind of men, bold men.  The talk is that we need revival, that we need a new baptism of the Holy Spirit—and God knows we must have both—but God will not revive mice.  He will not fill rabbits with the Holy Spirit.”

“Much that the church—even the evangelical church—is doing today, it is doing because it is afraid not to do it.  Ministerial associations take up projects for no higher reasons than that they are scared into it.  Whatever their ear-to-the-ground, fear-inspired reconnoitering leads them to believe—or fear—the world expects them to do, they will be doing come next Monday morning with all kinds of trumped-up zeal and show of godliness.  The pressure of public opinion calls these prophets, not the voice of Jehovah.”

“The free man has never been a religious tyrant, nor has he sought to lord it over God’s heritage.  It is fear and lack of self-assurance that has led men to try to bring others under their feet.  They have had some interest to protect, some position to secure, so they have demanded subjection from their followers as a guarantee of their own safety.  But the free man—never.  He has nothing to protect, no ambition to pursue and no enemy to fear.  For that reason he is completely careless of his standing among men.  If they follow him—well and good.  If not, he loses nothing that he holds dear.  But whether he is accepted or rejected, he will go on loving his people with sincere devotion, and only death can silence his tender intercession for them.”

“An encouraging thought for the true Christian is that the movement from orthodoxy to liberalism is usually slow, almost too slow to be perceived, where as the movement back to faith is sudden.” A.W. Tozer, This World:  Playground or Battleground?, p. …