Notice: Trying to access array offset on value of type bool in /home/greata7/public_html/aletheiabaptistministries.org/Blog/wp-content/themes/evolve/inc/dynamic-css.php on line 188
 The Things That Matter Most - Aletheia Baptist Ministries Skip to main content 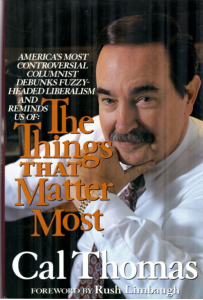 I have always appreciated Cal Thomas for being in the main stream media and yet speaking out for his obvious faith in Christ. In this book he even gets Rush Limbaugh to admit the same in the foreword.   The slant of this book is unique. As he puts it, ‘‘This is a book that recalls the sixties generation’s failed promises and how many now leading the country and culture who are from that generation continue to try to implement the philosophy upon which they were based, in spite of the evidence of failure and misery those broken promises created.’’   By hitting all the major issues such as abortion, sex, drugs and the rest, Thomas compares the attitudes that prevailed in the sixties of a utopian world if only a whole generation would fall in line.  Well, they did and it has brought nothing but despair to that generation and a loss of moral direction to this generation.  As one who was a teenager in the sixties, I enjoyed the ‘‘see, I told you so’’ feeling of reading this book. It’s just too bad it took twenty-five years for most to admit it.