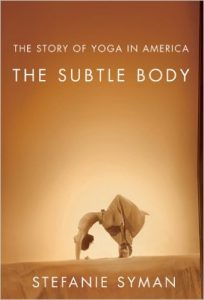 This is a 2010 book by Syman, a literature graduate of Yale University.  I first heard of the book when Albert Mohler wrote a review of it.  Syman practiced yoga for fifteen years before writing this historical review.  It is not a Christian book or even religious for that matter.  Syman tells the story of yoga in America from the days of the Transcendentalists (especially Ralph Waldo Emerson and Henry David Thoreau) in the late 1800s, to the rise in Hollywood, the wild 60s, and today’s commercialized use of the ancient religious ritual.  Since the author is not criticizing yoga per se, nor defending Christianity, she accomplishes her purpose of merely telling the story of the 150 years of yoga in America, an interesting and sometimes twisted story.  But Syman has done her homework, as you would expect.  Of the 390 pages, the text runs to 292, then the footnotes to 358, followed by 6 pages of bibliography, followed by the index.

The title “Subtle Body” is described a few times and is worth including the first description here.

“In Hatha Yoga, the subtle body describes a network of channels (nadis) and wheel-like vortices (chakras).  These are invisible to the naked eye and even the microscope; the subtle body is distinct from the gross or physical body, though manipulating one necessarily affects the other.

The purpose of practicing Hatha Yoga, including the postures as well as internal cleansing practices and breathing exercises, is to raise Kundalini, a powerful energy, which is typically lodged in the bottom chakra at the base of your spine, to the crown of your head, the top chakra” (p. 5).

The story of yoga in America is one of gradual inculcation and infiltration.  It first came to the east with the Transcendentalists, then to the west where it found a foothold in Los Angeles, especially Hollywood.  It was slow-going until yoga could be repackaged as an exercise and then practiced by well-known people from Marilyn Monroe to the Beatles.  A whole chapter is devoted to Margaret Woodrow Wilson, the daughter of the President, who made it acceptable to the elite political class as well.  Yoga has always been part of the drug and sex culture.  A few pictures are included in the middle, one of which is Maharishi Mahesh with the Beatles, and Swami Satchidananda, along with about twenty other swamis, giving the “invocation” at Woodstock which, of course, was nothing but sex and drugs.  The story is brought to the last chapter, “The New Penitents,” by which Syman means the gullible Americans who practice yoga feverishly as a way to punish the body in exercising and diet.  Of course, this also made yoga a very profitable industry in America.  The only reference to Christianity is at the end (see my article) where she admits that Americans are “willing to ignore the discontinuities” between yoga and “Judeo-Christian notions of God and the afterlife” (p. 291).

Mohler, after answering criticisms for his review of this book wrote, “I have heard from a myriad of Christians who insist that their practice of yoga involves absolutely no meditation, no spiritual direction, no inward concentration, and no thought element.  Well, if so, you are simply not practicing yoga.  You may be twisting yourselves into pretzels or grasshoppers, but if there is no meditation or direction of consciousness, you are not practicing yoga, you are simply performing a physical exercise.  Don’t call it yoga” (albertmohler.com, 10/07.2010).

I would add to Mohler’s conclusion, that by continuing to call exercise “yoga,” you are continuing to link your exercise to a false religion.  “Yoga” is not just a name with no connotation.  For millions of people in the world it connects your activity with their belief, something a Christian should not do.