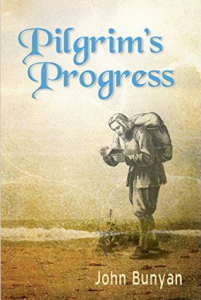 How many years has it been since you first read this classic book?  I decided it had been too long for me and when I acquired a used Kindle with this book already on it, I read it that way.  I must say that I again enjoyed it thoroughly and was challenged by its illustrations.  In a way, one has to make direct application from Bunyan’s characters to life situations.  When Christian, for example, meets two men named Obstinate and Pliable, it isn’t hard to figure out what they are like.  When he passes through a town named Vanity which has a fair that lasts twelve months out of the year, and he is not welcomed because of his clothing, his speech, and his demeanor, it is not hard to figure out what Bunyan means.  I would highly recommend a reread of this classic.  When you have done that, pick up Bunyan’s other classic, The Holy War, and read another allegory about the war over the city called mansoul.  Bunyan wrote some sixty works before dying prematurely due to a stormy-weather ride to London.  He is buried in Bunhill Fields where one can view his ornate tomb.