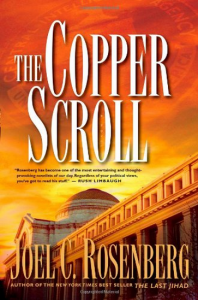 This is the second “novel” I’ve read by Joel Rosenberg.  He is the author who wrote The Last Jihad which depicted Islamic terrorists crashing airliners into US buildings, but written before 9/11.  With that notoriety he has written a series of biblically oriented books depicting last days scenarios.  I read The Ezekiel Option which gave Rosenberg’s conception of the battle of Gog and Magog.  As far as I can tell, Rosenberg is a post-tribulationalist, unless his whole view of eschatology is completely skewed.  He has the battle of Gog and Magog take place (following Ezekiel 38 & 39 pretty well) before the rebuilding of the temple in Jerusalem and yet he is still depicting the rapture as after those events.  This book, The Copper Scroll, has two “good guys” (American agents) decoding the Dead Sea Copper Scroll and finding the lost treasure which faithful priests hid from the Romans when they sacked the city.  This treasure will be used (in future novels) to build the tribulational temple.  Clean language and fun.