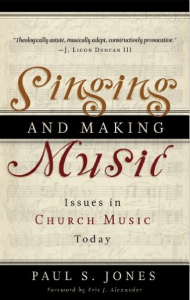 I heard Paul Jones lecture this fall and was pleasantly surprised at his detailed and conservative approach to church music.  Jones is music minister at Tenth Presbyterian Church in Philadelphia where he ministered under Dr. James M. Boice for a number of years before his death.  Jones is admittedly Presbyterian in his style of church services and music but is refreshingly candid about the need to reeducate our lay people in sacred music without going overboard in liturgical style.

Jones is a staunch defender of the use of the hymnal, a position which is (thankfully) growing again among conservative churches.  He is an avid proponent of a church producing its own music and not buying something made by who-knows-who in a studio somewhere.  Jones also loves the “actual” sound of instruments, not the synthesized sound of today’s electronic instruments.  I appreciated the chapter on music not being morally neutral and also the chapter on Luther and bar songs.  Perhaps someday soon those two canards will finally be put to rest and be given a decent burial!  Jones also is a firm believer that pop music produced and invented by unbelievers can’t be used to glorify God, “for only rarely does it set forth man’s best or purposely attempt to enlighten, teach, or display truth for the betterment of society.  It is not transcendent. . . . In short, it is commercial.”