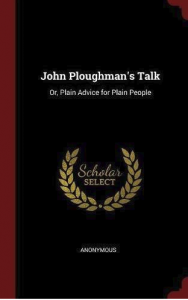 C.H.  Spurgeon had an amazing ability to speak or write to a wide variety of audiences.  Among the many things that he wrote, this little book became one of the most popular among laymen.  Here Spurgeon assumes the name John Bloughman and writes to the common man about common things.  “Ploughman” immediately drew pictures of the country man behind the plow.  Spurgeon’s preface begins like this:  “In ‘John Ploughman’s talk’ I have written for the plowmen and common people.  Refined taste and dainty words have been discarded for strong proverbial expressions and homely phrases.  I have aimed my blows at the devices of the many, and tried to inculcate those moral virtues without which men are degraded.”

The book contains 24 entries on subjects such as idleness, gossip, appearance, debt, discouragement, and even ignorant people.  The book is filled with small poems and sayings that Spurgeon must have collected over the years.  “In a great river great fish are found, but take good heed lest you be drown’d.”  “Better a poor horse than an empty stall; better a half a loaf than none at all.”  In our day a “rolling stone” is thought of as good because it “gathers no moss.”  Spurgeon said, “Do not be forever on the shift for a rolling stone gathers no moss.  Stick-to-it is the conqueror.  He who can wait long enough will win.”  “If you cannot cut a bit off your tongues, at least season them with the salt of grace.”  “Self praise is no recommendation.  The leanest pig squeaks the most.  It is not the hen which cackles most that lays most eggs.”

The book is filled with short quippy sayings like these and many more, as well as the short poems.  Spurgeon had an amazing memory, maybe photographic, but I think he must have kept and filed hundreds and hundreds of such sayings and then arranged them into the topics of this book.   We know he preached with few notes because his mind was filled with  information and recall of a thousand things.  It makes for a fun read.