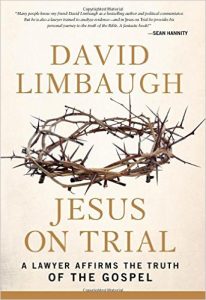 I am always open to reading new material from a variety of authors.  I have been interested in seeing and hearing David Limbaugh (the brother of the well known Rush) on television and radio because of his conversion to Christianity and his effective witness in those public forums.  This is a 2014 book on apologetics as Limbaugh has studied and understood it, and quite effectively being a lawyer himself.  All in all, I think this is a good book, especially for lay people who are interested in better understanding the important issues surrounding their faith.  It is much better than Rick Warren’s Purpose Driven Life, which was little more than an extended gospel tract.

Here are a couple examples of how Limbaugh addresses more well-known areas.  “That’s what we mean when we say that apologetics, examining the evidence, or reason alone can’t save us.  It can only get us to the point of faith.  In the end, no matter how much our intellect tells us that Christianity’s truth claims are valid, for salvation we must surrender and place our trust in Christ, and that’s a matter of the will, not the intellect.  But to say that saving faith involves more than the intellect is not the same thing as saying it is unreasonable or that it involves abandoning our rational faculties and embracing our faith blindly.  Our faith is based on abundant evidence, rationally weighed and considered, as this book intends to demonstrate.  It isn’t taking some blind leap; it’s taking a fully informed plunge of the will into the arms of Christ” (p. 75).

Also, in a section on prophecy and Daniel’s 70 weeks, Limbaugh says, “The final or seventieth seven would begin after the Rapture of the Church—not necessarily immediately after, but sometime after—and would end with Christ’s return to earth.  This seven-year period is known as the Great Tribulation or the Time of Jacob’s Trouble” (p. 195).  Limbaugh writes four chapters on the Bible itself and gives much detailed support for its inspiration and reliability, and then follows those with a good chapter on miracles and the resurrection.  His chapter, “Science Makes the Case—for Christianity” was exceptionally good on creation vs. evolution, detailed and up to date.  One drawback might be that he defends ID, Intelligent Design, but does not specifically propose a literal twenty-four hour interpretation of the days of Genesis one, but neither does he deny it.  I enjoyed the book and would recommend it to anyone wanting to bone up on their doctrine in an easy to read format.