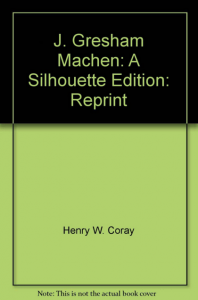 John Gresham Machen was born July 28, 1881 and died January, 1937.  Machen was another great Greek teacher, a Presbyterian, at Princeton Seminary in the days of B.B. Warfield, Charles Hodge and Geerhardus Vos.

Machen is best known for his conservative stand against the liberalism within his own denomination in the early 1930’s.  Machen (and Missionary Charles Woodbridge) broke from the Presbyterian Church, USA and formed a new mission board.  For this he was judicially tried and found guilty and his ordination revoked.  The author parallels the social issue among Presbyterians in 1967 over world “Reconciliation” and quotes Machen’s attitude toward such a “social measure about which no direct guidance is found in the Scriptures.”