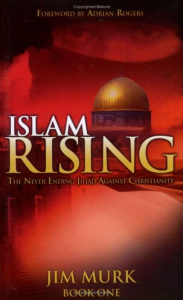 I have collected many books on Islam over the years, most of them small paperbacks written by middle eastern converts to Christianity.  They have all been very good and helpful, although they are often written in a personal, testimonial, format.  This book by Jim Murk has been the most helpful so far.  Murk has his Masters degrees from the University of Chicago in History and the University of Minnesota in Anthropology, and his PhD from Bob Jones University in Theology.  He taught for several years at Wheaton College and has traveled in 26 foreign countries, so he comes to this field well qualified.

In the seven chapters and three appendices, covering 250 pages, Murk gives the life of Muhammad, the background of Allah, Muhammad’s religious and warrior background, the Qur’an, Holy Jihad, and a comparison of Islam and Christianity.  The book is well documented especially with references to the Qur’an as well as the Hadith and Sunnah.  I would recommend owning a copy of the Qur’an (or Koran as we call it in English) and looking up the references as you go through the book.

The life of the founder of a religion is always interesting.  Many false religions are begun in similar fashion as is this one.  Muhammad was raised in a polytheistic world in Mecca.  He first married an Ebionite Christian wife who was fifteen years older.  He thought an evil spirit appeared to him in a cave and began to give him “recitations” that later became the Qur’an.  These were dictated to others because he could not read or write.  Muhammad later claimed that the spirit was really Gabriel and that the revelations were from Allah.  “Allah” was the name of the moon god which he worshiped as a young man.  He came to believe that this was the only god rather than one of many.  The crescent moon is still the emblem of Islam.  After his first wife died he married about fourteen wives within ten years, including a six-year old girl when he was 53.  From there Muhammad was obviously given to lust and later to war.  He conveniently was given a revelation from Allah that he could have as many wives and women as he wanted though Muslim men are only allowed four at a time.  Muhammad gathered an army and raided caravans for money.  In one raid he beheaded 700 Jewish men and sold the women and children as slaves.    Murk says “At least 25,000 slaves used to be sold in the markets of Mecca and Medina each year.”  The last words of Muhammad are, “the Lord destroy the Jews and Christians.  Let there not remain any faith but that of Islam throughout the whole of Arabia.”  Holy Jihad continues to this day, of course, not just in Arabia but throughout the world, which Islam believes is Allah’s will.

The study of the Qur’an is interesting but difficult (I have read most of it).  It is not a story or narrative, but a listing of the “recitations” with no apparent order other than the longest of 114 chapters (or Suras) to the shortest.  Since there are many contradictions in the Qur’an, the later ones take precedent over the earlier ones. The earlier ones were nicer and written during his younger years, and the later ones during his lurid and warrior years.  That is why Muslims can point to peaceful commands or to Jihadist commands at the same time.  Also, since Muhammad originally broke his treaty with Mecca and then turned and conquered it, he became the divine example and permission for Islamic treaty breaking. Islam is more of a political movement than a religion.  Its goal has always been world domination as the Qur’an abundantly reveals.  There is no atonement in Islam, no redemption, no salvation.  There is no doctrine of sin or a fall. Allah has determined everything. It is strictly a system of works, or keeping the five pillars (allegiance, prayers, alms, fasting, pilgrimage).  One can only hope that he will find paradise in the end.  The only guarantee of paradise is murder i.e., Jihad.

Paradise, as described in the Qur’an, is a lustful and selfish conception.  Each individual will have 80,000 slaves, 72 virgins, 300 attendants at each meal which contains 300 dishes.  Beside all this is riches, clothing, jewelry, and various other luxuries.   “In other words,” Murk writes, “in Islam’s Paradise, one may indulge in every sensual pleasure, which on earth might be considered sinful.”  It is really a sad religion which begs for a positive message of salvation.