Handbook of Denominations in the United States 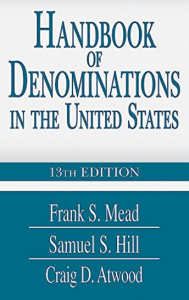 I have owned the sixth edition of this handbook for a long time so I was interested when I saw this new one.  This was published in 1995 and revised by Samuel Hill.  It has expanded the table of contents some, especially to cover the number of “evangelical” groups since the 1975 sixth edition.  Appendix A lists fourteen kinds including Charismatic, Black, Progressive, Radical, Conservative and Mainline (Methodist, Lutheran, etc).  It has added a few (not many) new entries such as the Branch Davidians, Reformed Baptists and the Berean Fundamental Church.