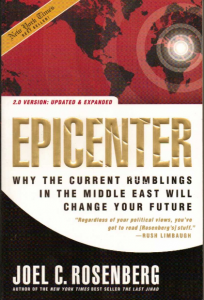 I enjoyed reading Rosenberg’s novels so I was willing to take a chance on a book about his life and how he came to his prophetic views.  I was somewhat disappointed.  In his novels, he majored on the battle of Gog and Magog (based on Ezekiel 38 &39) and God’s rescue of Israel during that future northern invasion.  In this book, Rosenberg begins to piece the other tribulation events together as well as many of his own biblical viewpoints.  I thought at first that he must be a post-tribulationist because he never before mentioned the rapture.  When he did finally mention it, he placed it after the battle of Gog & Magog which, to me, would have to place it at the end of the tribulation.  Actually, Rosenberg does believe in a pre-tribulation rapture but thinks Gog & Magog will be within the present age and still before a pre-trib rapture!  (p. 229 & 251).  He also admits that he could be wrong about that!  Typically, Rosenberg also becomes very ecumenical (p. 207-217) and indicates that Jews will be saved by their Jewishness, not by Jesus (229).